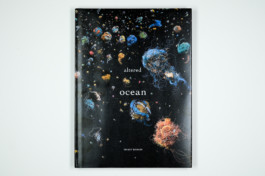 Altered Ocean presents a wide range of Barker’s work over the past 10 years, representing the mass accumulation of plastic currently contaminating our oceans— and the threat to wildlife, along with other environmental concerns. In her work, Barker combines aesthetic attraction with disturbing reality, presenting found plastic objects collected from shorelines across the globe.

Beyond Drifting: Imperfectly Known Animals makes reference to plankton, a diverse group of microscopic marine organisms living in the water column. Not able to swim against the current they exist in a drifting, floating, state. Current scientific research has found that plankton ingest micro plastic particles, mistaking them for food. Being at the base of the food chain, the impact on marine life and ultimately humankind itself is of vital concern.

In this series, unique ‘specimens’ of this animal species relate to the pioneering discoveries made by the marine biologist John Vaughn Thompson in Cobh, Cork harbor during the 1800’s. Presented as microscopic samples, objects of marine plastic debris, recovered from the same location, mimic Thompson’s early scientific discoveries of plankton. The series is presented as an ‘antique’ science book from the 1800’s, that, as well as reflecting the current situation regarding the organisms’ intake of plastic, also subtly includes the original writing, descriptions, and figures recorded by Thompson in his research memoirs of 1830, entitled, “Imperfectly Known Animals”.

Mandy Barker is a British photographer whose work involves marine plastic debris. Barker has taken part in several research expeditions to examine plastic debris around the planet, from Japan to Hawaii, to the remote island of the Inner Hebrides, Scotland. Working with scientists, Barker is dedicated to raising awareness about plastic pollution in the world’s oceans, and to highlight current research regarding the detrimental effects plastic pollution has on marine life and ultimately ourselves.